Let’s Talk About You

Tell what you can do for your visitor and how your service can help.

What is a four-string guitar?

The four-string guitar, aka the “tenor” guitar, is definitely not a new thing.

These guitars have been around since the late 1920s and have been manufactured by brands such as Gibson and C. F. Martin.

They were originally made as an alternative tool for banjo players. The four strings makes it easy for them to transition from a banjo to a guitar.

The four-string guitar has all the features of a standard electric or acoustic guitar.

It has a body, neck and fretboard, bridge, pickups, and headstock with four tuning pegs.

What makes it different (besides the number of strings) is its size. These are usually smaller than standard guitars and come in several variants – acoustic body, hollow body, semi-hollow body, full-body, cigar box, or resonator.

Is a four-string guitar easier to play?

The answer is yes. With two strings missing compared to a standard six-string guitar, the four strings guitars are easier to play, especially for beginners.

But although they have fewer strings, their harmonic and melodic options are quite large and the guitar has a solid range between the high and the low notes.

These guitars also serve as a great tool for learning other string instruments such as banjo, mandolin, ukulele, or bouzouki.

All you have to do to get started is to set the right tuning.

What are the notes on the four-string guitar?

There are many ways to tune the four-string guitar and it depends largely on the needs of the player.

Their original standard tune, typical of tenor instruments (banjo, mandolin, viola) is in fifths, starting with the C note on the 4th string, G note on the 3rd string, D note on the 2nd string and A note on the 1st string.

This type of tuning makes the four string guitar a serious harmonic instrument.

The other notes on the fretboard have the same layout as they do in the six-string guitar.

Every fret is a half step.

The dots on the fretboard make it easy to find the notes.

If not, don’t worry, you’ll learn them in no time.

Besides the tenor tune, there are many other ways, depending on the needs and creativity of the guitarist.

When it comes to experienced guitarists, the four-string guitars can be used for open G, E, or D tuning for blues slide or playing open-string chords.

Another popular way of tuning is standard guitar tuning – D, G, B, E.

And of course, the ukulele tuning is always a good option – C, E, G, A.

Should I get a three or four-string guitar?

These guitars are even easier to play, especially for beginners.

With a good tune setup, a little sense of rhythm, and perseverance, you can learn how to play your first song in no time.

Unlike the four-string guitars, these guitars lack the highest string.

This takes away a lot from the range and reduces the melodic possibilities.

But on the other hand, with the three-string guitar, you can learn any chord, just by using one or two fingers.

The three-string guitar can come in several variants as well, such as acoustic, electric, cigar box, resonator, or shovel guitar.

The popularity of these guitars is quite high and rising so many manufacturers have taken the job to produce a quality product seriously.

That is why you can find four-string tenor guitars for any purpose and price. And while a large number of choices is definitely a good thing, it can be overwhelming when you are trying to buy the best instrument you can afford.

So we did the work for you, and here are the top 5 tenor guitars out there.

This Eastwood classic tenor guitar is a wonderful example of a four-string guitar which is a great replacement for a six-string jazz model.

This semi-hollow electric guitar has a nice jazzy clean and a crispy overdrive sound.

However this guitar is designed for more serious and experienced tenor guitarists, so it might not be the best choice for beginners.

But if you are interested in playing jazz or blues, it might be a great four-string guitar option for you.

The Eastwood Delta 4 is a resonator type of guitar made for blues and bluegrass guitarists.

This is a great slide guitar due to the open string tuning options and the high action.

Although the guitar has a pickup and it’s great for plugging in, it also sounds great when unplugged. This guitar is perfect to bring to gigs, as it produces a decent sound even when it is unplugged. However, it is not the best choice for absolute beginners, which means if you haven’t had any experience with any instrument before, you might not want to start here.

Now, this is a guitar that is very suitable for beginners and lovers of the acoustic sound.

This tenor guitar is among the smallest you will find on the market.

Its wooden body and the metal strings are the reason for the fresh sound coming out of the guitar.

This guitar is the closest in sound to the standard metal strings acoustic guitar but if you look at the way it is held and played, it is very close to the banjo. 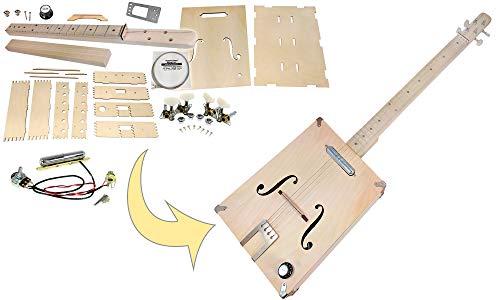 This three-string guitar is a typical American instrument. The name says enough about what kind of guitar it is.

These guitars are usually sold in the market as a kit that’s easy to assemble using only basic tools. The sound it produces is not something to be overly excited about, but it does the trick. It is fairly small in size which makes it easy to hold and carry around.

The body of the guitar is in the form of a box that is large enough to resonate and can hold the basic electronics for a pickup.

The Ibanez PFT-2 is one of the best tenor guitars.

This is based on sound quality, body build, and price.

This guitar is professional and ideal for experienced tenor guitarists.

But at the same time, the affordable price makes this four-string guitar a good option for beginners as well. The only downside would be that it is not very suitable to bring on gigs.